We take animal welfare seriously at Angell Pets We follow the top industry standards with our own animals and give our customers the best available advice and information so they can do the same. We also have contributed to animal conservation and welfare at other establishments and around the world. Our staff have worked on a projects locally with the Gloucester Wildlife Trust, across the UK, such as encouraging the re-introduction of otters to Birmingham and for the last few years at various locations around the world.

George Angell (familiar in the shop to many of our customers) left the UK to help with work on Assumption and Aldabra for SIF (Seychelles Island Federation). Having worked on Rhino conservation in Africa during university, he was keen to get involved as soon as possible. Initially landing on Mahe – the main island in the Seychelles, George worked for a few months on supporting Black Parrot conservation. This work was a long term project, continuing after George left that was recently declared a success. He moved on from Mahe to the main focus of his work on the Seychelles controlled Atolls of Adabra and Assumption. These islands are so remote, even from the Seychelles islands themselves, that travel there is not possible all year round, so George contributed to the Mahe project whilst waiting for transport to be available. 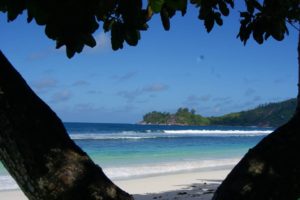 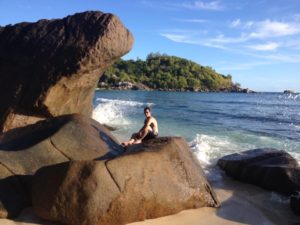 Aldabra is a world heritage site and as such is an important and therefore protected environment. Invasive species of birds had made it at least as far as Assumption Island (40 km from the coral atoll of Aldabra) and an E.U. funded project was in place to remove these birds before they got to Aldabra (and to check how many may have already have got there and remove them).

George left to assist with the removal of these birds, helping to protect this important and unique habitat. He also did his own research for his dissertation toward his higher degree on the work he will be involved in.

Aldabra and Assumption are extremely remote islands in the middle of the Indian ocean. Situated  1100km south west from the main Seychelles Islands, Assumption is only 11 square kilometres. The only population are the scientists George is joining who go by boat to study Aldabra and support staff who maintain the landing strip. He was not be able to get there until October as travel is not possible from the Seychelles island of Mahe until then.

Below is an extract from the project brief outlining why the work was important and what it was trying to achieve and George’s part in it.

Under the European Commission’s (EC) Thematic Programme for Environment and Sustainable Management of Natural Resources, including Energy, the Seychelles Islands Foundation (SIF) is implementing a 4-year project entitled “Mainstreaming the management of invasive alien species to preserve the ecological integrity and enhance the resilience of Seychelles World Heritage Sites” (‘the Action’) which started in February 2011. The overall objective of the Action is to develop and implement a strategic programme applying the ecosystem approach to limit the spread and reduce the impact of invasive alien species (IAS) in Seychelles’ World Heritage Sites (WHS). The Action is being coordinated and implemented by SIF, in partnership with the Seychelles Environment Department (ED) and National Parks Authority (SNPA), and with project associates Islands Development Company (IDC) and Island Conservation Society (ICS).

Under the project’s specific objectives, an eradication of avian IAS from Assumption of the Red-Whiskered Bulbul Pycnonotus jocosus and the Madagascar Fody, Foudia madagascariensis is underway. Until recently, Aldabra was thought to be the largest island in the world with no introduced avian species but in 2012 both the Assumption introduced species have been observed in the eastern part of Aldabra. These species have long been considered the most severe threat to Aldabra’s avifauna, making their eradication an immediate conservation priority. SIF is therefore running two parallel bird eradications on these adjacent islands. Due to the unexpected invasion on Aldabra , more staff are being recruited to help ensure the success of these eradications.

Georges specific role in this project was as follows.

1. Eradication of all introduced birds from Assumption and Aldabra

2. Improved understanding of avian IAS ecology on Assumption and Aldabra

4. Elimination of the threat of avian invasive species to Aldabra’s ecosystem and outstanding universal values

5. Recommendations for restoration of avian fauna on Assumption

George’ duties also included catching their own food (to quote the organiser – “hope you like fish and rice”) and there were lots of opportunities to see the local marine life (he had invested in prescription scuba goggles). Fortunately he didn’t get to see some of it too closely (sharks, venomous snails, fish etc.) and got to meet the famous Aldabran Giant Tortoise  very up close and personal. Assumption has an air strip that has to be cleared of tortoises before supply planes can land and so they are not all as friendly as those on Aldabra. George can vouch for that having been chased by “Terry” who’s head came up to Georges hip! He also made a trip across the island to an abandoned unfinished hotel where he had to construct barriers across the door ways to try to keep the robber crabs (giant land crabs) out of the gear – they steal everything! 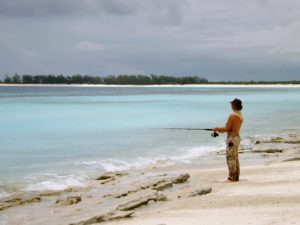 Fishing for dinner on Assumption

This, as you can imagine, was a sort after placement and George had to interview and compete to get the post. We were very pleased to be involved in such a globally important project and wish the team still on the islands every success in their continued efforts to protect our environment.

After completing his term on the SIF projects George returned to the UK to complete his  honours degree gaining a first. During this period he worked in the shop at weekends, providing our customers with the benefit of his growing knowledge base.

On completion of his degree he again looked about for conservation work around the world. There were a number of competing projects looked at, from  the Antarctic to the Galapagos. In the end he opted for New Zealand. 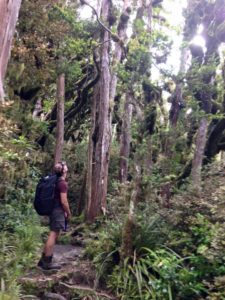 New Zealand is a group of islands with an endemic population of flora and fauna This means the animals and plants of New Zealand are found there and no where else in the world.

As these species have evolved in isolation, they are vulnerable to the introduction of invasive competing or predatory species from outside the islands. Since man has reached the islands there has been a decline of endemic species, from the now extinct Moa (a large flightless bird, hunted to extinction by the newly arrived Maori people) to the endangered Kiwis and Kakapo (smaller flightless birds, brought close to extinction by predators introduced by European settlers to control the rats and mice they had already accidently introduced from their ships and initial supplies). George was to become involved in the control and/or eradication of some of these invaders, such as the Australian brush tailed Possum, the European stoat, ferret and weasel to name but a few. 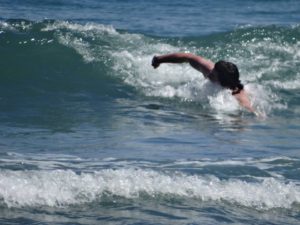 He spent three years working towards the stated aim of New Zealand to become predator free by 2050 (with a couple of months out to train vultures in Spain to fly with tourist on paragliders!) As a falconer, he also captured, trained and released two Autralasian Swamp Harriers during his stay, being amongst a mere handful of people in the world licensed to do this. 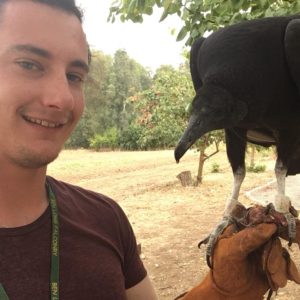 After three years of this work George has returned to the UK where he is using his expertise to train upcoming animal carers, handlers and perhaps future conservationists at a college in Oxford. At the same time he is working for us back in the shop in Hucclecote on Saturdays where our customers can benefit from his knowledge and experience. We are very happy that Angell Pets staff are so involved in the promotion of animal welfare at such a range of levels, from giving advice on dog food to protecting some of the worlds most endangered species in the most hands on way possible. 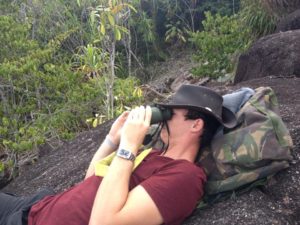 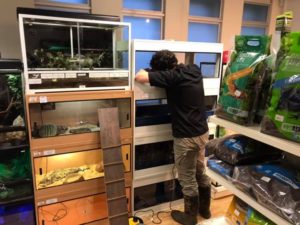 Back Working In The Shop

So there it is. Just a little background on just one of the Angell Pets staff members. Perhaps I’ll do another log at some point on the relevant experience of the rest of us one day.