I haven’t really posted much recently about our Gloucester pet shop. This has been due to the huge amount of work we have had to do involved with moving premises. I often get asked why we are moving and in fact still get asked why we moved from our original pet shop in Abbeymead. Well, it’s certainly not a decision we have ever taken lightly. The amount of work involved is tremendous and it is extremely expensive so we have only done it when forced to.

The original location for our Gloucester Pet Shop In Abbeymead was ideal for us and our customers. Right in the middle of a large housing development, withing walking distance of home, with a large free car park, close to other local amenities. The rent was way above market rate however and we were subletting from the people who were responsible for that. We have now had two subsequent properties, both of which are larger but are less rent and rates than Abbeymead. In the end we were forced to move from there, not through our own choice but because the lease expired and our landlord would not renew it as they wanted the premises for themselves.

The next location of our Gloucester pet shop was in Southgate Street. When we first moved our takings dipped significantly. This was not a surprise, it’s like starting a new business. Over the next six months we grew the business back to a level only just below that in Abbeymead. However we then had the rug pulled from under us by Gloucester City Council. At the behest of the Quays development they closed the nearest car park. I objected at the time but was told “we’ve carried out research and it shows that closing the car park will have a negligible effect on local businesses”. I don’t think anyone’s  definition of negligible would include wiping 50% off our takings, virtually overnight. You can’t believe how frustrating it was to hear “the parking’s rubbish round here”  every day! We had to move in order to survive. Unfortunately, as we were tied into the lease for three years we still had another 2 years to wait out with very little income. Our staff level went from a peak of 6 down to 2. On top of that the daily threat of violence toward staff from the idiots that frequent that area becomes a bit much, especially when your not getting paid to put up with it! 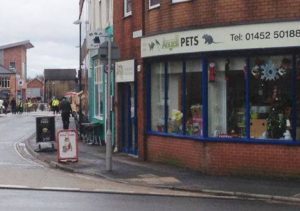 Anyway that is all behind us now and yesterday we opened a new Gloucester pet shop in Hucclecote. Well, we opened phase one. There is a lot of work to do on this property due to the condition it was left in by the previous tenant so we are having to do it in stages. Phase one is the left half of the shop and we have restocked with the wide range of quality food and accessories we are known for. Billie is currently working on phase two, which is our boarding and quarantine facility. Once that is completed in the next week we can move onto phase 3 which is where we will be stocking the animals and opening the shop out to fit in more floor space. 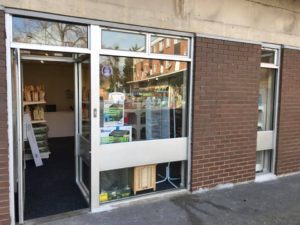 So come visit us in our new Gloucester pet shop at 2-3 Glenville Parade, Hucclecote, Gloucester GL3 3ES. The shop space is larger again and we have ample FREE parking. It’s perfectly located for Hucclecote (obviously), Abbeydale and Abbeymead, Brockworth, Matson etc. and is close to and easilly from accessible from, Churchdown, Longlevens, Tuffley, actually anywhere is Gloucester and Cheltenham.