We pride ourselves here at Angell Pets with the high level of qualification and experience of our staff. As part of his ongoing development George is off to Africa today to study for two weeks at the Mankwe game reserve.

This reserve is in the northwest province of South Africa and boasts such magnificent animals as the white rhino, giraffe, zebra, a host of antelope and gazelle species such as the springbok,blesbok and impala, leopards, servals, brown hyenas and jackals amongst many. It also has its fair share of  species that are not always so welcome. Last year apparently a spitting cobra was found in the camp (reputedly in a sleeping bag although that may just be the legend growing!). George has taken a black light to check his bedding at night and his shoes in the morning for scorpions. No doubt he will be spending quite a bit of time looking for spider burrows to further his knowledge of these in the wild.

This is a real opportunity for our staff, myself included to extend our knowledge of the animals we sell as several species of captive bred animals that we have or have had in stock originate from this region. Species such as the African brown house 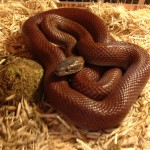 snake, leopard tortoise, multimammate mice (called rats in Africa), cut throat finch, and the yellow canary. They also have a large variety of birds of prey so George will be in his element.

So good luck to George in the first of his travels this year and we will keep you informed of further opportunities for extending our knowledge later in the year when he is off again to another part of the world.