Following on from a Facebook discussion on our fanpage I thought I would do a quick blog on this subject. A friend works in a local supermarket and he was saying he has several regular customers who buy dog food to feed the foxes. This started a general discussion in the shop and on Facebook on the reasons why this might be a very bad idea.

We are a pet shop and we sell rabbits, guinea pigs and poultry and the food and accessories to go with them. We are a local shop and we all live (with the exception of Ryan who is a forester) within a few minutes walk of the shop. We know the area well.

When I used to walk home from the shop of an evening I would see several foxes on the way. I have noticed myself that these foxes are becoming more bold. They don’t even run away now when I am out walking the dogs. This loss of fear of people is being encouraged by feeding. A wild fox should see us as a threat and keep away. If they are fed they get to see us as a meal ticket and so are more likely to get closer to us and our homes.

Foxes are very agile creatures. I have had several customers say to me when purchasing rabbits “I don’t need to worry about foxes, my garden’s surrounded by a six foot fence”. A fox will clear a six foot fence in a sigle bound. I know, I’ve seen them do it.

So you have a ferocious, agile, intelligent predator, quite capable of getting in any garden, on the look out for food. You put food out for it, so it knows gardens are the best place to look for food.

The fox comes in a garden, there is no food out for it here, so it goes through the bins, making a mess and noise in the process. It can’t get to the bin so it attacks the rabbits, guinea pigs or poultry in your neighbours garden.

We had 3 guinea pigs and a rabbit in a chicken run. The fox cut through the mesh like a knife through butter and killed them all. It does happen. A customer recently spotted a fox in her garden attacking the rabbit hutch. It couldn’t get in as it was one of our hutches and the mesh is fox proof. However one of the rabbits died from shock. Foxes are well known for going through a whole coup of chickens and killing them all.

I don’t want to demonize the fox. It is doing what it needs to do to survive. It kills everything it finds because it doesn’t know when it will find another meal. Left to its own devices it would return night after night to eat its victims. Obviously in the mean time the distraught owner has disposed of the bodies, so the fox gets a reputation as a wasteful killer.

Foxes, unfortunately, are a vector for the spread of disease. Myxomatosis is a virulent rabbit disease. It is always fatal and is a very painful way for the rabbit to die. The disease is spread between rabbits by fleas. The fox will kill a rabbit, the flea will jump on the fox, the fox will then go in your neighbours garden and approach their rabbit. The flea will jump off onto their rabbit and bite it, giving it the disease. This may not be a common occurrence but it does happen. I was unfortunate enough to see the result of such an incidence.

A customer brought in a rabbit to ask advice. The rabbit was sniffing, had the runs and its eyes had a nasty discharge. I took one look and could see it was Myxomatosis. I advised him to take the rabbit to a vet who put it down immediately. Its head was covered in lesions, it couldn’t see, I was surprised it made it to the vets.

Nearly all foxes in this area are infected with sarcoptic mange. This disease is caused by a microscopic mite that burrows through the skin layin its eggs, causing inflammation, irritation, hair loss and in extreme cases death. This disease is very contagious and can be contracted by dogs. 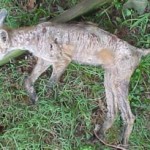 If a fox is in your neighbour’s garden and it comes into close contact with their dog (this can be just being in the same area as the dog will be) it will pass on the disease. Any fox coming into my garden will come into very close contact with Venus, my dog, i.e. inside her, so she is at risk of contracting mange through any of my neighbours encouraging foxes into the area through feeding them.

There was also the infamous case of the fox attacking the baby in its cot. Whilst this is extremely rare – even the boldest of foxes still avoid humans where possible (less so when suffering from mange) – it has been shown that foxes are attracted by the sound of a baby crying. It is thought that this may be because the sound is similar to that made by the vixen during mating. Again I don’t want to demonize foxes. This is highly unlikely to happen but why take the risk by feeding them?

So my advice is do not feed foxes. It encourages them into gardens where they can make a mess, disturb people, kill domestic pets, spread disease and, due to their growing lack of fear, come into contact with young children. Foxes are wild animals and should remain that way.

Lastly, we sell wild bird food and hedgehog food. Isn’t this hypocritical? They are wild animals too. True but many wild birds are dwindling in number through the increase in monoculture and loss of habitat. The same is true of the hedgehog. They now need our support to survive in many areas. Also they are not large, dangerous predators and do not carry the same diseases, or at least are not as effective as vectors for the spread of disease. Foxes are not endangered. They are doing quite alright on their own and do not need any support or encouragement.

This blog is my opinion. Whilst it is based on fact, it is my interpretation of the facts so you may well disagree. It’s a free country, you are welcome to disagree if you wish but just spare a thought for your neighbours and their pets that may suffer through foxes being encouraged by feeding.