Giant centipede – these fearsome beasts are becoming ever more popular as hobby species. In the past nearly all were wild caught specimens and as such something we do not sell. However a growing number of captive bred animals are now avaiable as hobbyists improve their knowledge of these facinating creatures and replicate conditions necessary for breeding the giant centipede.

ALL species of giant centipede are venomous, some very venomous. Deaths from bites are very rare and normally effect young. old or sick people but even if not fatal they are very painful and are medically significant. To add to this, the animals are very fast and generally very aggressive, our advice is DO NOT handle a giant centipede, always feed with tongs (nice long ones!) and execute extreme care when opening their enclosure. Obviously a giant centipede is not for the beginner and we would recommend them only for those people used to dealing with fast, aggressive but perhaps less venomous creatures (some of the old world tarantulas spring to mind).

The giant centipede is a bit of an anomoly. They burrow through the litter and top soil hunting their prey. They seem to “like” feeling something brushing against them, (a hide of some sort is recommended) and yet they will spend a lot of time out in the open: similar to the giant white knee tarantula, so they also make good display animals in any collection.

The giant centipede gets big (20cm+ with some species) and requires an enclosure that is at least twice the length of the adult giant centipede in both dimensions, bigger if possible. They are ground living but can climb up the corners (using the silicone for support) so a secure lid is a ‘must have’. No gaps – they WILL get out. There have been reports of them chewing out of thin plastic pots, so if using these type of pots with “pederlings” we would recommend “double bagging”: use a smaller pot inside a bigger one so you will still have a captive giant centipede if it gets throught the first pot. Have some height to the enclosure. It is not necessary for the health of the giant centipede but it is necessary for your health. They are fast and may well run up the side (if the height is less than the length of the giant centipede) to come and get you (or at least to make a break for it). Consider yourself informed of the risks. 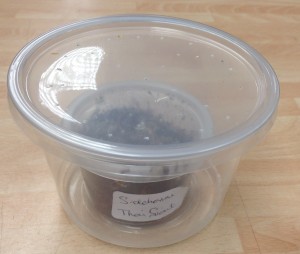 I won’t suggest what substrate you SHOULD use for a giant centipede, but alternatives to consider are coir, coir mixed with orgainic soil, a mix containing vermiculite etc. ProRep make a good substrate for spiders called “Spider Life” which also works really well. It can retain moisture but will discourage fungal growth, which is a good thing! You can add leaf litter for authentisity if you like (I do like a natural looking enclosure for my animals).

As with tarantulas a giant centipede gets most of its moisture from its food but do put in a shallow dish. I like the micro bowls for smaller specimens and the small/medium bark bowls for the larger ones. Remember, a hide is a ‘must have’. A flat piece of cork bark works well and is nice and cheap. Other than those listed, you don’t really need anything else in the enclosure for your giant centipede.

The giant centipede comes from tropical regions around the world: this means the climate is warm and humid. Humidity can be easily maintianed by deliberately overflowing the water bowl (slightly) and intermittent gentle misting (generally a couple of times a week should surfice, but just monitor the humdity to make sure and don’t over do it and stress out the centipede). A heat mat is probably the gentlest way to heat a giant centipede enclosure; it will also cause one patch of the substrate to dry giving a mixture of micro environments (wetter around the water bowl, dry around the heat mat) and a temperature gradient. This allows the giant centipede to choose where it wants to be rather than having to stay too damp or too dry, both of which could be a problem during its moult. A rough temperature of 75 -85 centigrade is what you are aiming for (too high and the giant centipede will dry out and not be able to moult properly) too low and it will not metabolise properly. Humidity needs to be around 75 – 80% and is particularly important for pederlings of most species. Too low and again dessication will occur, too high and mould, fungus, mites etc start to infest and this is seriously detrimental to the health of the centipede.. Humdity can be adjusted by the size of the water dish, misting frequency, cover of the ventilation grills etc. 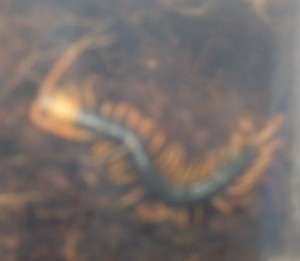 Giant centipedes are voracious carnivores. They actively hunt anything from small insects to mice and lizards. Don’t feed anything too large (no larger that half its length, maximum), live insects are fine (micros for very small pederlings), you can go up to mice for the real big ones. I shouldn’t have to point out that feeding live mice is illegal (UK) and is the realm of the fool who wants to “show off”. There is no need to do it. Always use tongs or tweezers if feeding directly. If you put in live insects and they are still there after a couple of days take them out. Your giant centipede could be getting ready to moult and during this time is very vulnerable to attack from prey species (who may themselves by carnivorous). Never leave dead or rotting food in the enclosure. It should be warm and humid in there and this is just the right conditions for some nasty fungii and bacteria to flourish, putting your treasured giant centipede at risk. Keep the enclosure clean.

Just a quick word on species. The commonest genus of giant centipede found in shops is Scolopendra. This genus contains a number of species and sub species of giant centipede found right round the world, some naturally, some introduced. Variation amongst single species is also common. This makes the giant centipede very hard to identify. Species and sub species classifications change with research. Two dark giant centipedes could be different species, two that are different colours could be the same species. Often the actual differences that seperate them are very small (microscopic) and can only really be seen on dead specimens (it may be differences in teeth and you would’t want to be checking those on a live one!). For this reason mistakes in classification are common and any species name should be taken as given in good faith but possibly wrong. As more captive bred specimens arrive on the market this should improve.