Occasionally we get customers come into the shop for advice on a wide variety of animal care issues that can all be linked to the same consideration. Where, in your home, should an animal be housed. I am not talking about what type of cage (although obviously that is important) but whereabouts that enclosure is sited.

Problems caused by “incorrectly” locating an enclosure can range from algal growth in a fish tank to death in birds. Often unexplained deaths or illnesses can be attributed to where the enclosure (tank, cage, vivarium etc.) has been sited. I’ll run through a few of the issues with a selection of different animals and, where I can, illustrate with a real example. This will not be an exhaustive list, I would be here forever but is just to get you thinking about where you are going to house the enclosure before you buy an animal, or to think if there is any improvement to be made with your existing set up. 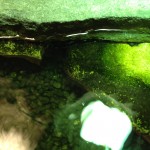 Algal growth caused by too much light

So, the enclosure is not in a window and not in a kitchen. There are considerations on where in the room to site it, some general, some specific to the species of animal.

The basic message to anyone thinking of buying any pet should be do your homework first. Can your accomodate that animal in your home given all of its specific requirements? If not, either you are going to have to make some modifications or reconsider and maybe get something else that can be safely fitted in. Don’t get the animal first and then think about where it’s going to go, or worse not give any consideration to the animals needs at all and blame where you got it from for all the problems.

If you are unsure, come in and ask before you make a decision to buy. Anyone is welcome to come and ask us any thing (animal related please) at any time. I would rather you asked me advice and decided not to buy than you didn’t ask, I make a sale and then the animal suffered. That said, if you don’t ask, we are going to  tell you anyway. You’re not getting out of the shop with an animal without us giving you all the information you need. We would rather you ask though, as you are more likely to be receptive to the information than if we’re ramming it down your throat.

Oh and it should go without saying that if the place your are thinking of buying any animal from does not know the answers to the issues mentioned above or doesn’t show any interest in telling you, do not buy from them, they should not be selling animals. Also only buy from somewhere you can ask these sorts of questions. Often the question only comes to mind during a general chat about the animal, you can’t do that online!!