Paws On Patrol is a community project administered by Safer Gloucester that has been running successfully in Gloucester since 2012. It is a project aimed at reducing the opportunities for crime and anti-social behaviour to occur, reducing the fear of crime especially in the vulnerable and building a community spirit where dog walkers can contribute towards the protection of their neighbourhood.

You can register for the Paws On Patrol Scheme form their website. Each year they hold an event in Gloucester park to promote the scheme and bring the dog walking community together. It’s a great day out for the family, free to attend and this year we have a stand at the event where we will be giving away a couple of hundred goody bags FREE on afirst come first served basis.

Paws On Patrol 2015 is being held in Gloucester park on the 16th May 2015 between 12pm and 5pm. There will be a large number of attractions including  displays from the police dogs (attack and passive searching), agility displays and this year they have the Quack Pack – collies herding ducks as well as a free to enter fun dog show. 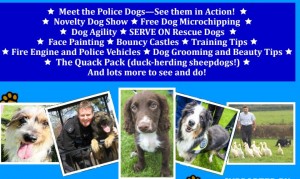 Pop down and see us at Paws On Patrol 2015 and pick up a goody bag. We will probalby have a few bits of doggy stuff for sales as well but not too much as it’s only a few hundred yards from the shop!

The Angell Pets Team (sponsors of Paws On Patrol 2015)