How to treat snake mites – one method out of  many 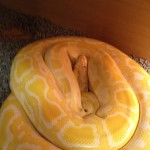 There are many ideas on how to treat snake mites. Most have their own merits and most have there own drawbacks. I have used a few of these and have had success removing the mites but have also had less desirable results as well. The only method I have used where the downside is much less than the up is the one I am going to outline here.

If you have a lot of snakes (a breeder or just lucky enough to have a large collection) you may find the main drawback of this method of how to treat snake mites a little to much for you. Basically it takes a bit more time than other methods. However it’s the safest I have found.

I will mention other methods of how to treat snake mites I have tried or where I have heard of others that have tried them. I will outline what I have found to be the downsides of these other methods of how to treat snake mites and of the method I use. Whichever method you decide to use is your choice and no doubt will be based on your own particular set of circumstances. I am not saying my method is the best for everyone but it is the best for me and you may want to try it too.

I have left off discussing predatory mites for two reasons. Firstly I have no direct experience of this method of how to treat snake mites (you buy another, predatory species of mite that eats the snake mites). Secondly I do not use the right sort of substrate in my snake vivs. You need a more soil type substrate for the predatory mites to thrive. Apparently you just chuck ’em in, they go to work chomping on your snake’s mites and then die off when there’s no food left. Neat huh.

When I next get a snake with mites in the shop (we sometimes rescue snake) I will make a video showing how to treat snake mites based on this method. You will be able to see it on our YouTube channel. Subscribe now and receive notification when it’s posted.

So there you go. Zoo Med mite off on the snake and isopropyl alcohol on the viv. is how to treat snake mites safely. Well, its how I do it and it’s always worked with no side effects and that’s what you want, isn’t it.?